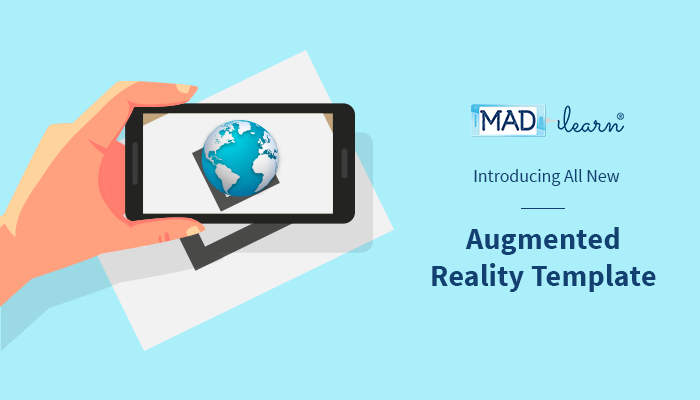 The latest “wow factor” for students to explore when creating their apps is an augmented reality (AR) element! Students can now build screens in their mobile apps that allow the end user to experience an augmented reality element as it pertains to their app. AR uses live, real-world environments that are augmented with superimposed computer-generated images over a user’s view of the real world.

Marker-based augmented reality (also called Image Recognition) uses a camera and some type of visual marker (like the Hiro marker, seen here), to produce a result when the marker is in view. This new feature in MAD-learn uses the camera on the end user’s mobile device to distinguish a marker from any other real world object. The position and orientation is also calculated, in which some type of content and/or information is then displayed in 3D form, over the marker.

The key point for students building apps with MAD-learn is creating an experience for your end user that helps them understand what you’re doing and why it’s important; to help them see and experience something in more depth than was ever possible before! So far, we have created several AR components to get the ball rolling, and there will soon be more, based on your ideas and suggestions.

One of our outstanding summer interns, Anuraj Bhatnagar, who had been experimenting with augmented reality while in graduate school at the Georgia Institute of Technology pushed the idea forward. He worked with our Product Development team to help make the feature a reality for students…or should we say an augmented reality? In his words, “we are helping to democratize technology by providing resources for students to learn how to build and launch their own apps and ideas.”

We are excited to announce this brand new AR feature and can’t wait to hear what you think about it! Log in today, play with it, and tell us what you think! Based on early responses and user feedback, we know it’s going to be a big hit with the students, as well as a powerful tool for the future.

MAD-news for May: Virtual Summer Camp options to consider

View all posts by Doreen →